What are the fine fescues?

The term “Fescue” is one that you may often hear during golf TV broadcasts or in dialogue with a person about planting, maintaining, controlling, etc. some kind of grass. However, just using the term “fescue” really doesn’t tell you much about this grass because there are many different kinds of fescues.

Festuca is a Latin word meaning stem or stalk and it is the genus (first word in scientific name) for fescue grass species. Hence, Festuca grasses are named fescue. However, recently tall fescue [Schedonorus arundinaceus (Schreb.) Dumort.; synonym = Lolium arundinaceum (Schreb.) S.J. Darbyshire; synonym = Festuca arundinacea Schreb.] and meadow fescue [Schedonorus pratensis (Huds.) P. Beauv. (formerly Festuca pratensis Huds.)] were reclassified by scientists into the genus Schedonorus, although they still retain their same common name of fescue. The wider or broad-leaved tall fescue and meadow fescue are similar, with meadow fescue being used sparingly for overseeding in warm-season turf or as a forage grass, and tall fescue commonly being used in lawns, roadsides and pastures (Figure 1). 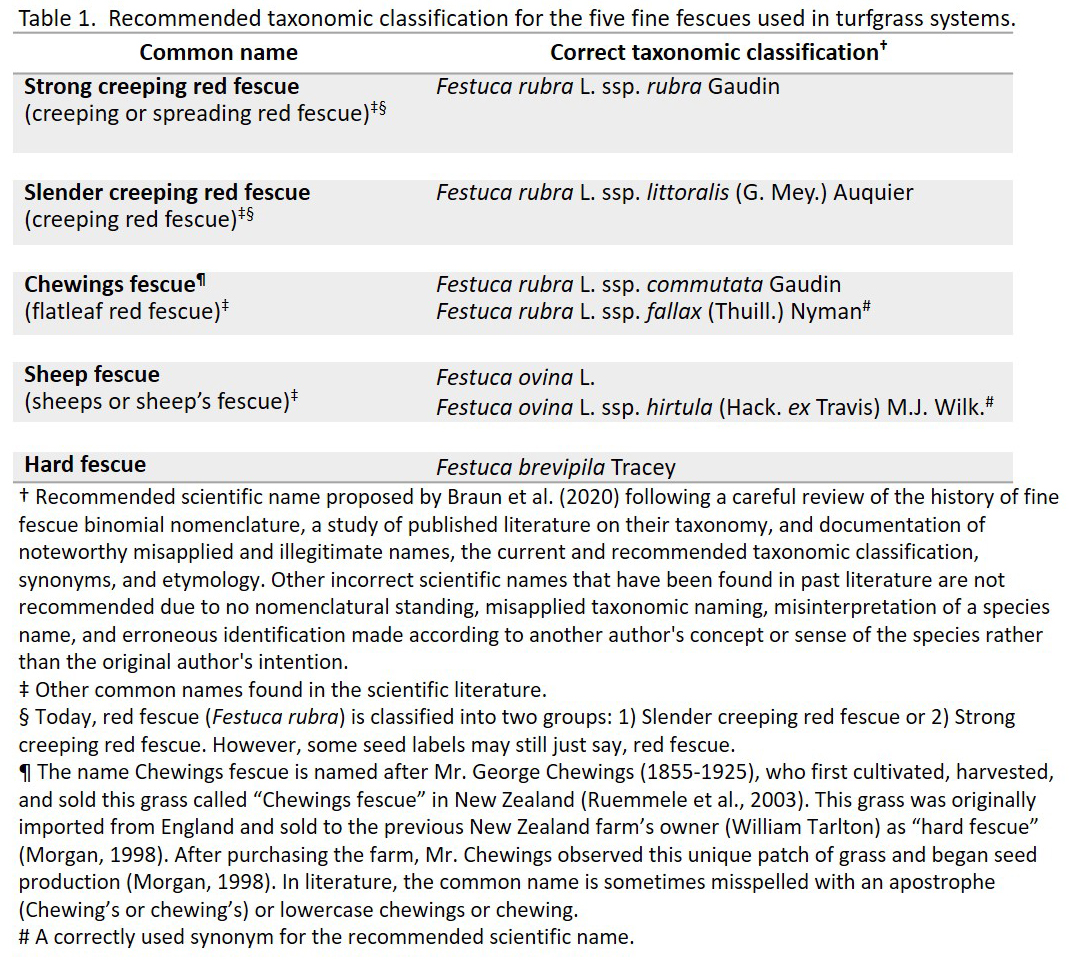 There is a lot of confusion and debate regarding the scientific (taxonomic) classification of fine fescues (Table 1). Recently, the team of researchers working on this grant "Increasing Low-Input Turfgrass Adoption Through Breeding, Innovation, and Public Education", from the USDA-NIFA through the Specialty Crop Research Initiative has put together an exhaustive scientific review of the fine fescue turf species that clearly documents differences in growth, production, establishment, management, utilization, pest tolerance, and stress tolerance of fine fescues (Braun et al., 2020). In the review by Braun et al. (2020), the recommended taxonomic classification is presented (Table 1) to bring greater clarity and accuracy to the use of scientific names for these grasses in the future.

Until now, we have still frequently referred to these five turfgrasses as a single group which leads homeowners and turf practitioners to infer that the individual species perform similarly, which is not the case. Our team recommends that users and researchers of these grasses begin to refer to each fine fescue individually, by their specific common or scientific name here forward. Our team will author new educational materials that describe the strengths and weaknesses of each: strong creeping red fescue, slender creeping red fescue, Chewings fescue, sheep fescue and hard fescue. With the new information attained from this research on the performance of these grasses and an understanding of their management, practitioners can capitalize on the strengths of individual fine fescue taxa (taxa, plural of taxon, which is a group of one or more populations of an organism or organisms used in the science of biological classification, or taxonomy) resulting in increased adoption and benefits from low-input turf.

This project was supported by the National Institute of Food and Agriculture, U.S. Department of Agriculture, Specialty Crops Research Initiative under award number 2017-51181-27222.